NOT the MotoGP News: #IndonesianGP 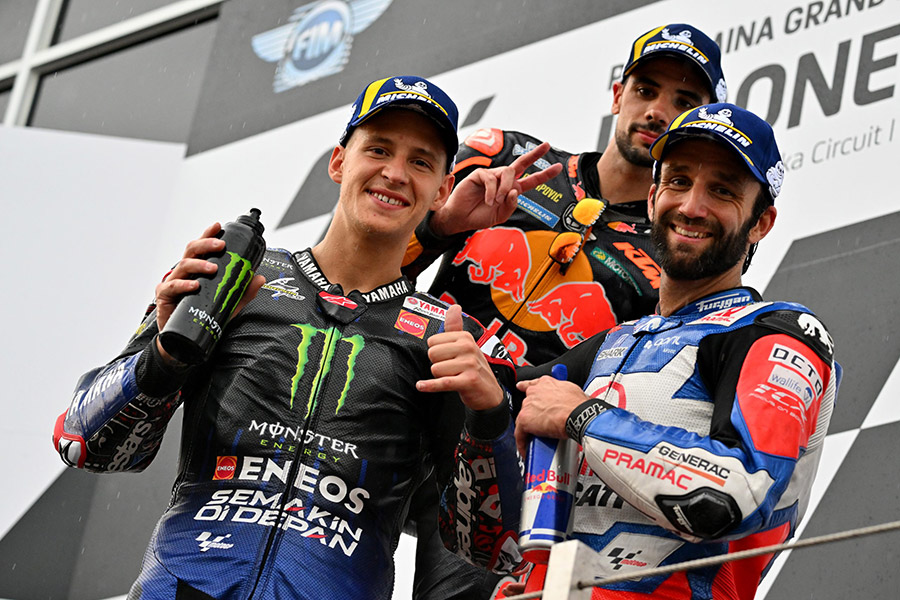 Ah Lemsip! The relief for cold symptoms…… Which if you were in Indonesia, you might well need. Naming a circuit after a cure for colds was surely either normative determinism or downright genius. Yep, it rained. And storms did smite the circuit with bolts of lightning. Would this be the most excitement we’d see all morning? Yes, morning. For the race was held far far away from us and we had to get up nice and early. Though we could have had an hour and fifteen minutes extra in bed because that rain delayed the race until 8:15am GMT.

Coffee, sir? Bacon roll, sir? That’ll do nicely Gareth. Thank you. Anyway, we missed the opening ceremony if indeed they did have one this weekend.

A long, long time ago, not in a galaxy far away, but here, Marco Melandri was christened by Stuey* as MNRG – Marco, Random Number Generator. These days it’s the results that are utterly random. Did you have Oliveira down as the winner? Nope. He didn’t even finish in Qatar. He did however qualify 7th this weekend. Still no sign he was going to win.

Quatro-formagi however, did qualify well. Pole. And finished in second. So, the Frenchman’s defence of his title could well be back on track. Oliveira got a cracking start as did Fabio, who looked for half lap that he might bugger off into the distance. A drift onto a very wet white line soon sorted that out and he was swamped by Oliveira and Miller. No one likes to be described as a wet weather specialist (hello Oliveier Jacques!**), least of all Jackeroo Miller but he was looking good in the rain.

So too were the Suzukis of Rins and Mir. They too had had a mare in Qatar after so much expectation. So, this was perfect pay back if only they could keep their heads (sorry – that’s a dreadful Qatar pun).

The Portuguese pilot took the lead and just started to make a gap into a country mile. How can someone go from mid-pack mediocrity most of last season to being this good? Now the only consistency is Quat. He slipped to fifth then worked his way back into second spot. And that probably felt like a win to him.

Last race it was Brad “the teeth” Binder. This round it’s Johan “omg” Zarco; where did he get those from? And that beard? A fancy dress shop? To be fair he was Ducati’s best rider this race finishing in 3rd (and 8th last race, so doing well). Pint-sized ladies’ love Jorge Martin (there’s a LL Cool J joke in here – Ed) went for a swim on lap 8 at turn 1. The unmentioned as yet Pecco Baggy scared the bee-jesus out of himself, lost a lot of places as a result and finished in a lowly 15th. This is what we mean by Random Number Generator; form is no help whatsoever. Neither are the experts.

In our notes, we’ve just seen that we wrote “Binder on Binder”. That’s not some weird fetishist fantasy. Honestly. It just meant that Darryn was catching Brad. Which was weird. Turns out Brad’s KTM low-ride device was stuck in low-ride all race. KISS – Keep It Simple, Stupid.

Meanwhile up front, the race became a little strung out which was no surprise given the conditions. Miller, Zarco and Quat had had a good battle for second, with Quat coming out on top and Zarco besting his factory colleague for third.

Quat tried his best to hunt Oliveira down but ran out of laps. Well done Oli.

Onto Argentina, the land of chuffing good steaks and the mysterious lands of Patagonia. And Evita – no crying, eh?

“And after a while, you can work on points for style
Like the club tie, and the firm handshake……”

*Really? Do we have to explain? Get away with yourself
** No, look him up yourself.

#IndonesianGP, humour
Get All Our Latest News Sent Direct To Your Inbox
Join 30,271 other subscribers.
Follow on Social Media
Get the VROOM Podcast
Download our Vroom.GP App