NOT the MotoGP News: #AmericasGP – No COTA for Old Men 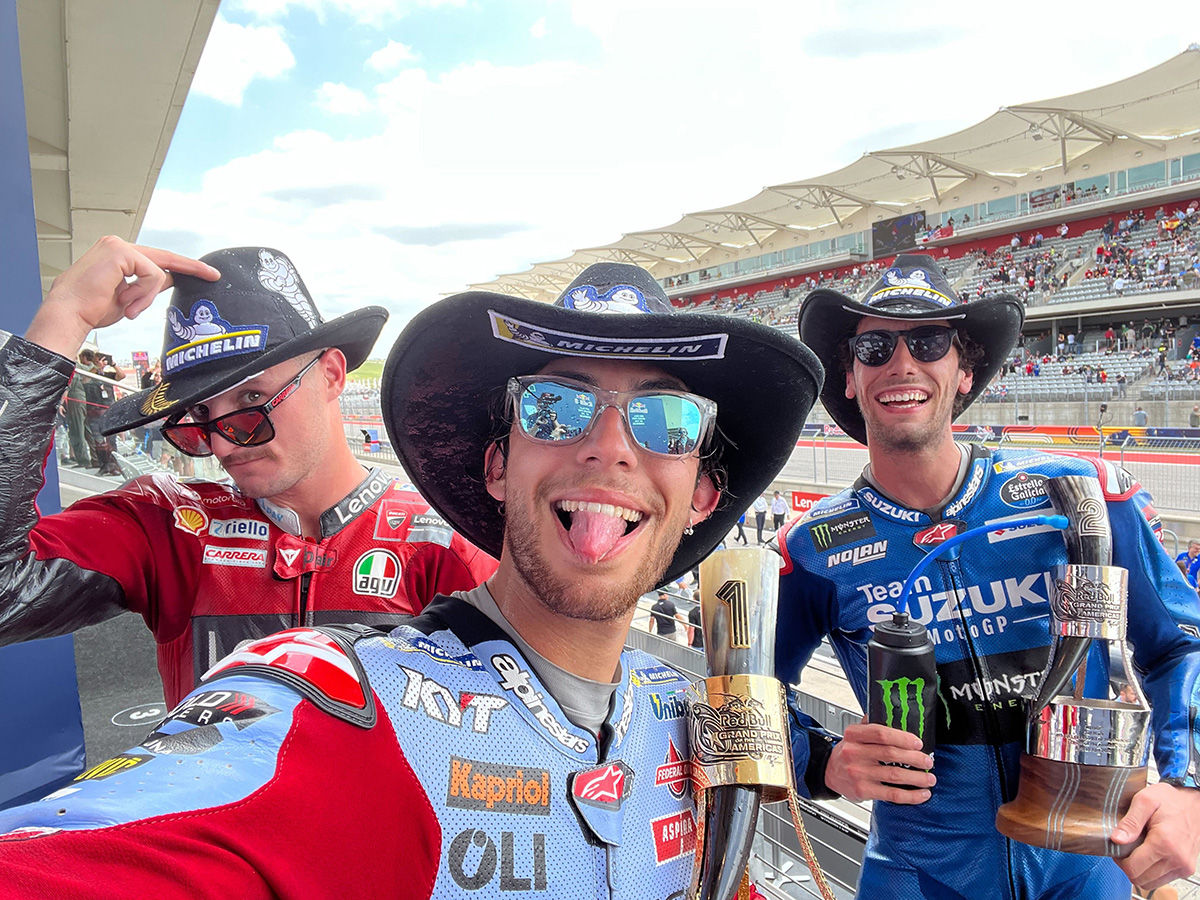 From where were, we saw no sight of the Texas Hurricane, so we’re not sure what he’s up to these days.  As usual Revvin Kevin Schwantz was there (the only GP Champion with just one vowel in his surname), and up popped Cool Kenny Roberts.  Which was nice.

As for the race, well it was both fascinating and unpredictable as they’ve started to become.  This is good because it means we don’t have to rely on Moto3 for our entertainment.

The front five places on the grid were stacked with Ducatis.  And Marc Marquez was back!  The Batman was back!  But then he or his bike had a serious electrical fault** as the lights went out.  This meant he started from dead last.  No matter – he was past his brother Alex in a mere few corners.

Out front, the Ducatis were stealing the headlines.  Miller looked like he was riding for his career whereas Zarco had already been told his seat at Pramac was safe for next season.  We imagine Miller might be his teammate next year.  Eventual winner Bastianini was in third and looking good ahead of Bagnaia.

Further down the field, Marc was carving and slicing as only he can; the rest of the ‘Ondas were nowhere. Pol had the excuse of food poisoning whereas Alex and Origami are just having no fun at all.

Just as bad are Yamaha; Quat was the only Yamaha rider in the top 15.  Surreal. Dovi appears to be a wasted seat and Darryn is a rookie. But Morbi? What on earth is going on? Think Viñales made a bad decision?  No, we don’t either.  COTA is no track for KTM either.  However, we still think Tech-3 got a better deal going down the KTM route, than Razlan did going down the M1 route.

Suzuki and Aprilia?  Boy, you’d want to be a rider on either, but preferably on a ‘Zook.  Tilbury Dock’s finest (err that’s Rins folks) has gone from being good, to bad to wow, and his teammate wasn’t far behind too. What you might call a Satin finish ma’am.  Second and fourth has put ‘Zook at the top of the constructors’ championship.  Throughout the race Rins looked cool and calm whilst the 2020 champion looked just as good.  This makes us very happy; any bike that can break the Ducati monopoly is good enough for us.

Aprilia? Well, is he back? Has Viñales found his inner Tom Cruise? Will he be Aprilia’s Top Gun (you can pack that kind of crap in – Ed); he beat last race’s winner and dare we hope for some podiums (probably not tbh)?  Secretly we love Mav, but don’t tell anyone – he’s fragile and fast.  Like a better Kocinski.

So, Ducati won, but should have had a podium lock out.  Suzuki and Aprilia did brilliantly.  ‘Onda are lucky they have Marc.  They’d look woeful without him.  Ditto Yamaha and Fabio, and next season unless they bring either two M1s welded together or mega bucks, Quat is going elsewhere.  KTM?  Meh.

* You work it out – its Razorlight

**It’s a euphemism for anything untoward engine-wise folks

#AmericasGP, humour
Get All Our Latest News Sent Direct To Your Inbox
Join 30,253 other subscribers.
Follow on Social Media
Get the VROOM Podcast
Download our Vroom.GP App