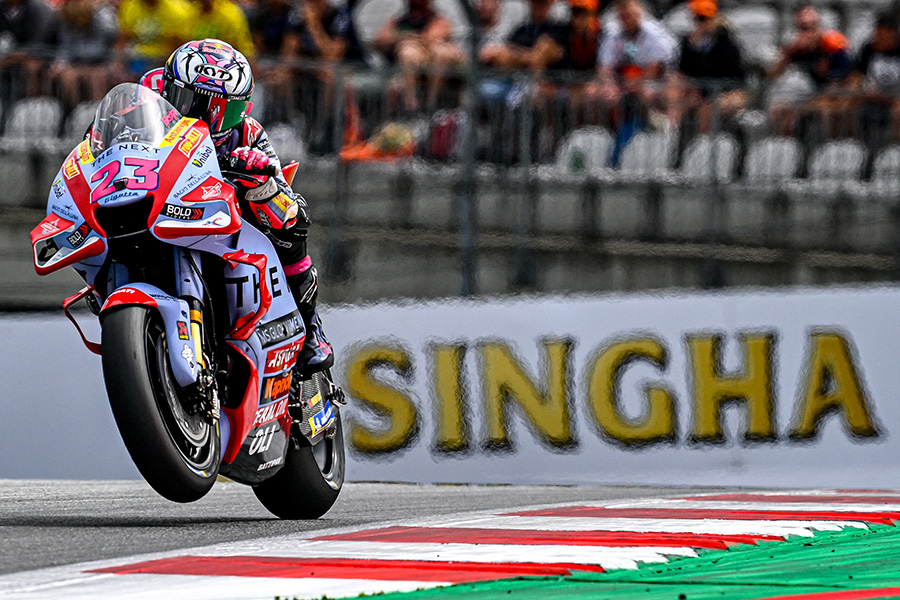 Q1
For the first time since the Americas GP, Aleix Espargaro found himself in Q1 and with both Quartararo and Bagnaia looking in fine form, progression into Q2 was all that mattered. And it was the title-chasing Spaniard who set the first couple of benchmarks, with younger brother Pol Espargaro (Repsol Honda Team) slotting into P2 just 0.045s behind.

Luca Marini’s (Mooney VR46 Racing Team) best effort on his first run put him third as the top three sat 0.068s apart with seven minutes of Q1 left. Drama then unfolded at Turn 2B as both Marco Bezzecchi (Mooney VR46 Racing Team) and Alex Marquez (LCR Honda Castrol) crash in quick succession, thankfully both riders were ok, as Aleix Espargaro improved his lap by a couple of tenths to strengthen his grip on a Q2 spot. But it wasn’t over.

Marini was on a flyer as Fabio Di Giannantonio (Gresini Racing MotoGP™) pounced to P2, but Marini lost time in the second half of the lap and couldn’t beat his Ducati counterpart to the second promotion spot. With no one else threatening the top two, Aleix Espargaro was safe and joining him in Q2 was Italian GP polesitter Di Giannantonio.

Q2
Miller slammed in the first benchmark – a 1:29.164 – but the pace was upped on the second flying laps. Espargaro went top with a 1:29.032 before Miller bounced back to set a 1:28.898, the fastest lap of the weekend so far. Espargaro’s lap was then cancelled so the Spaniard dropped to P5 behind Bastianini, Johann Zarco (Prima Pramac Racing) and Joan Mir (Team Suzuki Ecstar), with Quartararo and Bagnaia P6 and P12 respectively – the latter yet to set a time after running wide at the new Turn 2 chicane.

Pecco was the first rider to emerge on a fresh set of soft Michelin rear rubber and pounced straight up to P2 to make it a factory Ducati 1-2, 0.101s splitting Miller and Pecco. The in-form Italian was then at the summit of the times by 0.102s after a storming second effort, with Quartararo only able to grab P5. That soon turned into P6 as Maverick Viñales (Aprilia Racing) went P5.

As the clock ticked down, a beast was on the prowl. And sure enough, Bastianini was able to beat Bagnaia’s time by 0.024s to claim his first premier class pole position to front a Ducati armada at the spearhead of the grid.

Behind Bastianini, Bagnaia and Miller, 2021 Red Bull Ring race winner Jorge Martin (Prima Pramac Racing) will start from P4 ahead of reigning World Champion Quartararo, who is once again the first non-Ducati rider in the standings. Zarco will start sixth alongside his compatriot, with a trio of Spaniards making up the third – including Aleix Espargaro. Viñales and Mir finished 7th and 8th in Q2 with Espargaro’s lap time cancellation for exceeding track limits at Turn 8 causing him to start from 9th.

Lopez was the early pace-setter in Q2 and the 20-year-old Spaniard was back on top when he set a 1:33.981 on his third flying lap. Ogura soon took up second position, albeit at more than two tenths of a second off the pace, and he continued to be a threat. He was setting a succession of ‘red’ first and second sectors, but was struggling to improve over the course of the whole lap.

Jake Dixon (Zinia GASGAS Aspar Team) capitalised somewhat by moving into second on a 1:34.104 with less than three minutes to go, before Ogura finally strung all four sectors together well enough to clock a 1:34.001. Having closed the gap to Lopez, the Saitama-born pilot then completely overcame it when he punched out a 1:33.933 just before the chequered flag. For Ogura, who is second in the World Championship, it is a second career Moto2™ pole, but Lopez’s reward is a still commendable front row start to follow up his first ever podium taken at Silverstone. Fernandez, meanwhile, earned third with an even later 1:34.101.

Dixon was therefore classified fourth, with Somkiat Chantra (Idemitsu Honda Team Asia) fifth at just a single thousandth of a second slower again. Pedro Acosta (Red Bull KTM Ajo), who is back in the saddle after breaking a femur in a motocross training crash, took an impressive sixth with a late 1:34.126, while Celestino Vietti (Mooney VR46 Racing Team) was seventh on a 1:34.170.

Back in Q1, Joe Roberts (Italtrans Racing Team) and then Jeremy Alcoba (Liqui Moly Intact GP) both improved after the chequered flag. However, Alcoba was still 0.084 seconds shy of the top four and Roberts 0.120 seconds outside the cut-off, with the two set to start 19th and 20th respectively.

Ogura has the opportunity to not only get his second Moto2™ race win, but also to close the gap to and potentially even pass Fernandez in the World Championship standings.

Red Bull KTM Ajo rookie Daniel Holgado has his first pole position in the Moto3™ World Championship after qualifying fastest for the CryptoDATA Motorrad Grand Prix von Österreich. The Spaniard was already set to start from the front row when he clocked a 1:41.234 with the chequered flag out on Q2 at the Red Bull Ring – Spielberg, beating Ayumu Sasaki (Sterilgarda Husqvarna Max) by just 0.010. Joining them on the front row will be Deniz Öncü (Red Bull KTM Tech3), while World Championship leader Sergio Garcia (AutoSolar GASGAS Aspar Team) is set to get away from Row 4.

Dennis Foggia (Leopard Racing) set the fastest initial flyer in Q2, a 1:41.632, but Sasaki was top once the first runs were done on a 1:41.244 which had him more than three tenths of a second up on the field. When the riders headed back out for their second runs, Holgado moved to second with a 1:41.410 just before the chequered flag, then Öncü set a 1:41.379 on his final lap.

Holgado, however, managed to find almost another two tenths of a second to not only get himself back ahead of Öncü, but also knock Sasaki off pole position. Still, the Japanese rider is set to start from second position and it will be especially important for him to get a good start when lights go out on Sunday morning, given he is to serve a double Long Lap Penalty for irresponsible riding back at the British Grand Prix.

Heading up the second row will be Riccardo Rossi (SIC58 Squadra Corse), who clocked a 1:41.506 with the chequered flag out. Foggia claimed sixth having improved to a 1:41.588 early on his second run, and he will have Diogo Moreira (MT Helmets – MSI) starting on his outside given the Silverstone pole-sitter went as quick as a 1:41.627 in Q2 in the hills of Spielberg.

Tatsuki Suzuki (Leopard Racing) had to go the long way about it after missing the top 14 in the three Free Practice sessions, but the Japanese rider comfortably progressed from Q1 and eventually earnt seventh on the grid courtesy of a 1:41.638. Izan Guevara, who is just three points behind AutoSolar GASGAS Aspar Team team-mate Garcia in the World Championship, claimed eighth on a 1:41.642, and Kaito Toba (CIP Green Power) was marginally slower in ninth.

Stefano Nepa (Angeluss MTA Team) rounded out the top 10, while Garcia had lifted himself as high as sixth on a 1:41.772 with the chequers flying, only to be shuffled back to 11th all-told. Garcia is down in 12th as he aims to move back forward on Sunday, with high powered fellow frontrunner Jaume Masia (Red Bull KTM Ajo) for company. Masia had a spill at Turn 3 halfway through the second stanza of qualifying but remounted and would be classified 12th.