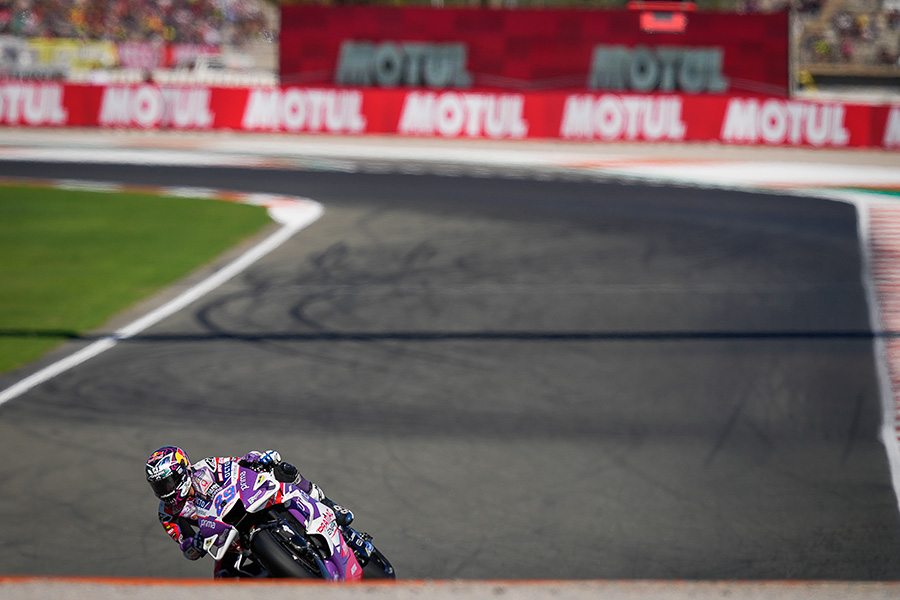 This is it. The stage is set for the #TheDecider. On pole it’s Jorge Martin (Prima Pramac Racing) followed by Marc Marquez (Repsol Honda Team) and Jack Miller (Ducati Lenovo Team) to make some interesting front row dynamics, while Fabio Quartararo (Monster Energy Yamaha MotoGP™) pushed as hard has he could – and then some – to earn P4 on the grid at the Circuit Ricardo Tormo.

Importantly for Yamaha’s title contender, he will start a full row ahead of World Championship leader Francesco Bagnaia (Ducati Lenovo Team), who qualified eighth – with everything still very much possible in this title fight…

Miller’s hopes of one last pole for Ducati then disappeared when he crashed at Turn 2, while an under-the-weather Marc Marquez jumped from ninth to P2 when he fired in a 1:30.049. Bagnaia then moved to sixth, ahead of Quartararo, before ‘El Diablo’ leapfrogged his title rival by clocking a 1:30.027.

There were more yellow flags when Johann Zarco (Prima Pramac Racing) had a spill at Turn 6, while Bagnaia toured the run-off at Turn 8. Quartararo was still on a hot lap and, fortunately for him, it was unaffected as he sought to elevate himself further up the grid. He did indeed move up two spots more to fourth with a 1:29.900 before running into the Turn 2 gravel trap on his final lap of the session – although that was in fact a moot point with replays showing FQ20 also running onto the green at Turn 1 beforehand.

Enea Bastianini (Gresini Racing MotoGP™) had moved into second place in Q1 with a 1:30.193 but Rins hit back and then Bastianini’s chances of advancing to Q2 were dashed when he crashed at Turn 2 – rider okay. ‘La Bestia’ is set to start 13th and Miguel Oliveira (Red Bull KTM Factory Racing), who topped FP4 and then threatened to upstage both Viñales and Rins late in Q1, from 14th.

Acosta was the pace-setter in both FP2 and FP3, and he started Q2 in the same fashion with a 1:34.972 on his opening flyer. Next time through, Lopez took over P1 with a 1:34.314 before Acosta fell just short of reclaiming top spot by a single thousandth. Still, both are under the All Time Lap Record. Incredibly, Lopez then went and set yet another 1:34.314, meaning he can boast two identical fastest laps of the session!

Championship protagonists Augusto Fernandez (Red Bull KTM Ajo) and Ai Ogura (Idemitsu Honda Team Asia) take P3 and P5, respectively, with the former also leading the latter by 9.5 points in the standings ahead of a decisive final race of the season.

After Ogura had closed in on Fernandez in FP3, he laid down the challenge by lapping quicker than the Spaniard in the early stages of Q2. The Championship-leading KTM Ajo ultimately overhauled him to sit third but Ogura will be just one row behind in fifth.

Between them on the timesheets is Tony Arbolino (Elf Marc VDS Racing Team), who came from Q1 to take fourth on the grid with a 1:34.583. Sixth went to fellow Q1 graduate Joe Roberts (Italtrans Racing Team) and seventh to Aron Canet (Flexbox HP 40), while Fermin Aldeguer (Beta Tools Speed Up) dusted himself off from a crash at Turn 2 to move up to eighth thanks to a 1:34.771 on his final lap. Celestino Vietti (Mooney VR46 Racing Team) topped Q1 before securing a P9 start and Lorenzo Dalla Porta (Italtrans Racing Team) rounded out the top 10.

Diogo Moreira (MT Helmets – MSI) is fourth on the grid, and the Brazilian leads the fight for Rookie of the Year heading into the final race. He is currently on 104 points ahead of Red Bull KTM Ajo’s Daniel Holgado (97) and BOE Motorsports’ David Muñoz (84), his only rivals. Muñoz qualified 14th and Holgado 15th, but both will move up a place as 11th-fastest rider Jaume Masia (Red Bull KTM Ajo) will start from pitlane.

Masia was involved in arguably the headline grabber of the day in Moto3™, as he and Kaito Toba (CIP Green Power) had a coming together on-track in FP3 followed by fisticuffs on the sidelines. Both have been given a pitlane start and Long Lap for the race, as well as a fine of 1000 euros.